So I almost said no to going to a second Disney park in Tokyo — but I’m sure glad Jeff talked me into it!  The park is huge, but managable and there is great attention to detail and theming of different areas.  Really I now think everyone should experience it for themselves.

The morning started with a 20 minute walk to the park after our express metro ride.  It was warm but not bad.  Due to power cut backs, a lot of AC is off so it did get stuffy in some queues, but the park was significantly less busy than yesterday at Disneyland and with fast passes and shorter lines, we got through everything we wanted to pretty easily.

Only hiccup was that we decided to go light and bring one camera and it failed on us part way through so I got fewer photos of genie stuff than I would have liked to.  But dig this – there is a carousel in the Arabian Coast area gives you a chance to ride on multi-colored genies!  Bummed I missed the photo op for my sis, Jeff decided her and I need to make a trip back sometimes (he says he’ll watch George =P ).

Right before the camera crash was the awesomest parade/water show/performance I have ever seen at Disney.  Ok I take that back, but it was awesome!  10 water floats and jet skis and on the back of jet skis at one point was a second guy flying 5 kites at once, omg!  I can’t even describe it except to say it was a whole array of color and show with dancing and characters and I bet a whooooole lotta money went into it!

Food was also up to my Disney food standards – lots of cury – YUM – including cury popcorn which I loved but Jeff hated.  These parks are all about the popcorn.  Yesterday we had soy sauce and butter flavor, today it was cury, then caramel, and then strawberry (twice, because it was that good).  Um, why hasn’t DL California caught onto this amazing pocorn idea.  I’m convinced that anything will taste good on popcorn now – and I usually say I don’t even like the stuff!

Jeff’s most favorite ride of the day was Journey to the Center of the Earth, which we rode twice.  Starts out as a slow ride through, though beautiful, then gets all crazy and speedy and roller coaster-y. =)  The first ride we went on, with a 360 degree loop, was lame for as scary as they made it sound, but I must say it was smooth.  This park just had a lot of cool different things.

My favorite attraction was probably the Ariel show.  With dialogue in Japanese and songs in English, we got most of it – but everyone flys around above you as if swimming while you watch from the ocean floor.  Ariel’s whole land is underground which was a cool escape from the heat and was so cutely done with colorful lighting and rides.

On our way home we finally got to experience a truly packed metro.  Twice I thought “hmm, this is pretty full” and I was apparently wrong because more crammed in.  Didn’t have to hold on, just had to be squished in the swaying mass for a stop or two.  It was pretty fun. =)

We went to the 100 Yen store after that (Japan’s version of the Dollar Tree) and bought a few goodies.  I think Dollar Tree is better but this store is 4 stories and is pretty nuts.

Tomorrow we have decided to stick around here and visit some parks including the Imperial Palace.

Here are the pictures we managed to get today: 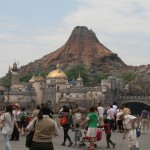 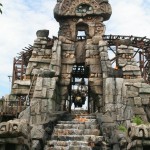 The not so scary ride 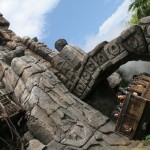 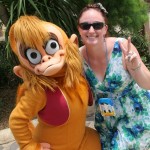 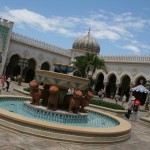 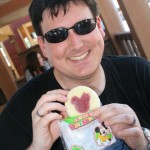 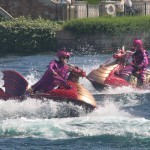 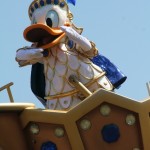 My favorite little man (aside from George Goer) 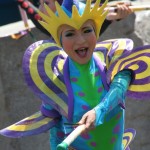 One of the many colorful costumes from the show