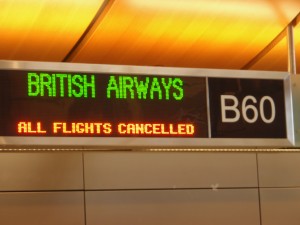 Oh my goodness, what a weekend.  I just have to document the whole thing regardless of the fact that I’ve been too aggravated and sleep deprived to take a decent photo yet.

It all started Saturday (PST) at about 8am.  We ate our breakfast, then received an alert from a droid app at 9am that our British Air flight to London was canceled due to Heathrow being closed.  We decided to go to the airport since we were just a few blocks away at Marriott and the wait on the phone was 5 hours.  Also, the internet told us the flights were operating regularly.  Liars.  So we get to LAX about 10am to find out the queue will not open till 11:30, which later changes to 12:30.  We were 6th in line and didn’t get to talk to anyone till 1pm. 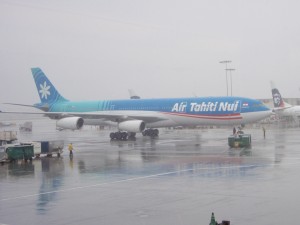 In the meantime, I tried to book on other airlines for the same day but all were full.  When we got to the counter, the man basically told us there was nothing he could do for us and would not even try to re-book our tickets since we were from Orange County – his advice: go home and try online.  (Also the advice of the form letter we received – but wait – the site is down and the other option is 5 hours on the phone (not to mention we got hung up on after waiting 1 hour)).  So, we called AAA who found us an Air Tahiti Nui flight for Sunday morning, but we couldn’t book on the phone, so we went to the TN counter, which we also couldn’t book at due to late notice – so… we called and booked… and had to go back to the counter to pay since we could not pay last minute on the phone.

So all is slightly good again – back to Marriott for another night (thanks for free honeymoon money!) and we ate some food, watched a movie, went to bed and woke up 6am Sunday for our 11:40am flight with Air Tahiti Nui.

First in line, the counter opened at 8am and we checked our bags and waiting in the security line.  Once we got to the gate around 9am, the plane was shortly behind us but apparently it was a different plane and ours was late which meant we took off at 1pm instead of 11:40.  Pas de probleme.  We had taken off on a direct flight to Paris… so we thought. 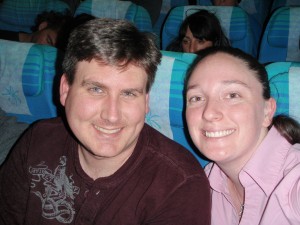 Right before landing in Paris… or not

15 minutes before our arrival and watching the screens to note progress, we were super excited until wait! – It now says we are going to Geneva and we won’t be there for 90 minutes?!  This must be a mistake.  The flight attendant has mo clue, people start mumbling in surprise and we can definitely tell we have turned off the route for Paris. (sheesh I should have taken a picture of this screen!)

5 Minutes later the time updates again and we are now 12 minutes from our landing (whew!), but wait, the destination symbol is not on Paris… it is on… Lille?  What is Lille? Are they having some trouble with the view thing? Hmm.  Captain comes on the speaker and says we are about to land, fasten your seat belts…ok.. no mention of not going to Paris.. but we have sure made an odd zig zag through the sky.  Ah, 5 minutes till landing.  “Je regrette mais Charle du Gualle est ferme.”  We all know what that means. 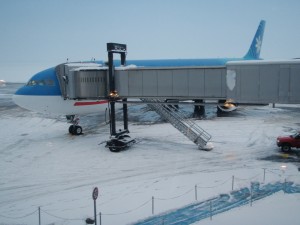 Our plane in Lille

So here we land in Lille… on a Tahitian plane.  The grounds crew got such a kick out of this tropical plane being in the snow.  And we are told to stay on the plane for info… no get off… so we do the latter.  About a half hour goes by and we are told of 2 options.  Back on the plane and hope we get a spot to land as weather has let up, be there in about 2 hours, or hire buses for us to drive what is usually a 2 hour trip in poor weather. 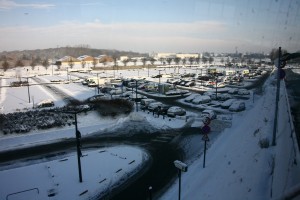 Leaving Lille – Our view from the bus

I didn’t think I’d say this after 12 hours in a plane – but I wanted to get back on that plane.  Alas, the crew was overworked and we had to wait for plan B.  It took another hour at least before our bags were released then a half hour of waiting to get them off the conveyor belt and onto the bus.  The drive took more than 2 hours for sure and 5.5 hours after we land in Lille, we are in CDG airport.

You’d think it would be easy from there but for the life of me I could not get a payphone to work.  I finally dialed and it told me that the number I had for out apartment owner was wrong… so we just went on the RER, hoping he’d be waiting but doubting it since we would be over 6 hours late.  He wasn’t there – I used a hotel lobby phone to try his number again and it worked.  30 minutes later we were inside.

And the rest is pretty normal – we are exhausted… hadn’t eaten a thing for 12 hours… and Jeff has fallen asleep while I write this. 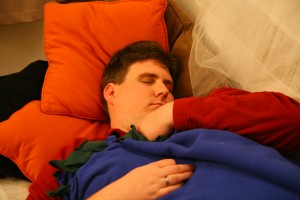 It is 8:30 Paris time and we have been awake for 30 hours (well with a few periods of dozing).  Time to sleep 12 hours and hope tomorrow is a better day.