Jenn’s take on the Propsal Night 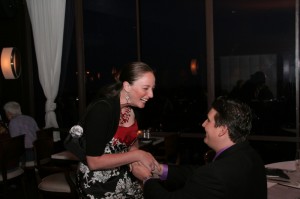 After arriving to West – quite late and slightly anxious about that, Laura and I rushed up in the elevator and checked in –  “Jennifer McNeil for two, right this way” the hostess told me.  I walked around the corner where she told me to watch the steps, I was looking down at them and when I looked back up, I saw a man that I believed to be Jeff because of his stance and staring at me, but it was dark, so for a millisecond I thought I must be crazy.  I then saw a camera man, a very professional one, in the corner, and I am pretty sure I knew what was about to happen.  I don’t think I looked back at Laura until later, but I knew she was back there.

I said hi to Jeff and gave him a hug and then he dropped to his knee which made my heart race.  “Jennifer Lynn McNeil, you mean more to me than… than…”  there was a long pause and I waited for him.  “I have been practicing this all day long but that’s all I can remember!”  Seeing his terrified face, I wasn’t so afraid anymore and wittily said “than an oil change?” (inside joke).  “Than anything!” he blurted out.  “I want to spend the rest of my life with you,” he said.   I nodded.   “I want you to marry me.”  I nodded.  “Will you marry me?” he finally asked.  I nodded a lot and dropped to my knees.  I couldn’t get anything to come out except nods and nervous giggles.  “Will you say yes please?”  And I did, giggling the whole time because I just was so happy that he was asking and so happy I wasn’t bawling my eyes out!

Once I said yes, he asked me to stand back up and he took out a ring box.  He told me to take my other ring off and he opened the box to reveal a ring shining more than any other I have ever seen. – And I’ve seen a lot!  As he slid it on my finger, I still don’t think it felt real to me.

I turned around to Laura – “did you know about this!?” I asked.  “Uh, yeah!” was her response.  We laughed and hugged and I am so happy.

The waiter came around with Champagne dressed with strawberries and the photo guy came closer to the table, took the camera out of his face and that is when I realized it was James! (Laura’s boyfriend)  He’d been doing such an awesome job, I figured Jeff had hired someone.

As salads came out, Jeff showed me he posted on Facebook. “Oh my gosh Jeff, my sister CANNOT find out this way!” I exclaimed.  I called her promptly, no answer.  I called my mom, no answer.  I called the house line and left a message for anyone to call me back.  And then I called Barbara, my pre-school teacher.  She didn’t answer either but my groggy mom called my back since my message had woken her up.  She seemed out of it but has since called me and said “Ahh! You’re engaged!!!!”  I then got a hold of my sister and her husband on their landline, called my brother who called me a ho upon answering and then insisted on giving Jeff a talking to, called my Aunt Linda, and called my dad.

Then I got a text from Dionna – apparently Jeff texted her too, so I called to tell her myself, a little late.  oops!

Dinner was wonderful, even when Jeff asked to try my Halibut and ended up eating the last half of it.  I tried his filet and Laura’s mushroom pasta – both so yummy!  Then desserts upon desserts came out and filled me to the rim. 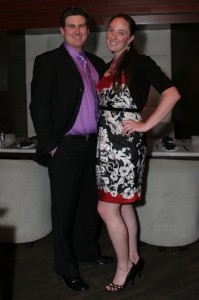 We then took more pictures of the group of us and some outside the hotel.  Laura and James left and Jeff showed me to out room.  He went all out – champagne, chocolate covered strawberries, rose petals… =)

We just laid down in bed, talking about how happy both of us were and tearing up here and there.  We didn’t fall asleep till about 2 am and I barely slept, the excitement wouldn’t let me.

Today has continues to be a whirlwind of wonderfulness – easy-over eggs and applewood smoked BACON for breakfast and an easy stroll around the Getty Center gardens.  What more could I want for my first day as half of a betrothed couple?  Life seems pretty joyous right now – maybe that’s because it all happened at a Joie de Vivre hotel.  SO fitting Jeff. =P

I look forward to documenting everything like a crazy person.  I know it will all go well.