All the details of the proposal night from Jeff

Jenn and I are back at home now.  We had a great night at WEST and Hotel Angeleno. Here is what happened last night from my point of view. 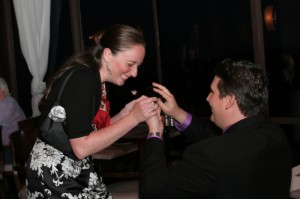 Jennifer, will you marry me?

Jenn was working from 9am to 1pm. At 1:30pm Laura arrived at the house and Jenn bought Pat & Oscar’s for lunch.  The limo was scheduled for 2pm, however it was a little late because of traffic.  So the limo arrived at 2:30pm and the girls left promptly.  I then closed up the house and grabbed the packed suitcase and all the other items I needed for the proposal.  The next stop was at my work in Santa Ana for some small gifts that I had hidden away from Jenn this whole time.  I then stopped by CVS to get some travel size tissues, munchies and beer for James and me.  On my way to the hotel I stopped to get gas and a car wash, cuz my car was in no condition to be valet parked.  I arrived at the hotel about 6pm and was shown to my room.  I had a bottle of Jenn’s favorite champagne put on ice for later.  About 6:45 James pulled into the hotel, came up to the room and him and I had a few bottles of Blue Moon beer.  Him and I watched Blades of Glory with Will Farrel and chatted about interships, work etc.  It was nice to get to know him a little bit better before the dinner.  James is a great guy and also a pretty good photographer.  I showed him how to use my camera to take some photos of the proposal and they turned out well.  About 7:30 Laura texted me that they were passing LAX.  James and I went up to WEST at that time, to the table I had picked out with the hoestess’ help.  It was a round table in the back corner of the restaurant, quiet and yet still part of the atmosphere.  The limo driver then texted me shortly with that they were exiting the freeway.  I then got up and looked out the window of the 17th story restaurant.  I saw the limo pull into the hotel and from that point on I could not sit down. 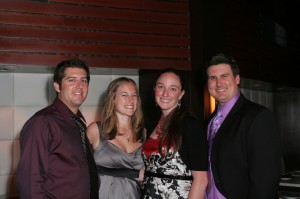 James got up, turned on the camera and got in a very professional stance.  In a few minutes I saw Jenn and Laura round the hostess desk.  Jenn stopped after 5 feet, then continued to walk to me.  I gave Jenn a hug and then got down on one knee.  What I remember saying was “Jennifer Lynn McNeil.  I love you, you mean more to me than… ”  and then I choked up.  I could not finish what I wanted to say.  I wanted to say something like you mean more to me than the world. I need you everyday of the rest of my life. Will you please marry me?  But it all seemed to come out like “fiddley blah blah blah” (much like Chandler in Friends).  Jenn then said “more to me than an oil change?  Side note: One time when Jenn and I first started dating I said that to her.” You add more to my life than an oil change”  I then told her that I had been thinking of what to say all week and all day and when it came down to the line I just blanked.  Jenn then started nodding yes and I said “Can you please just say Yes?”  To which she did.  I then put the engagement ring on her finger and stood up and we hugged for a few minutes. 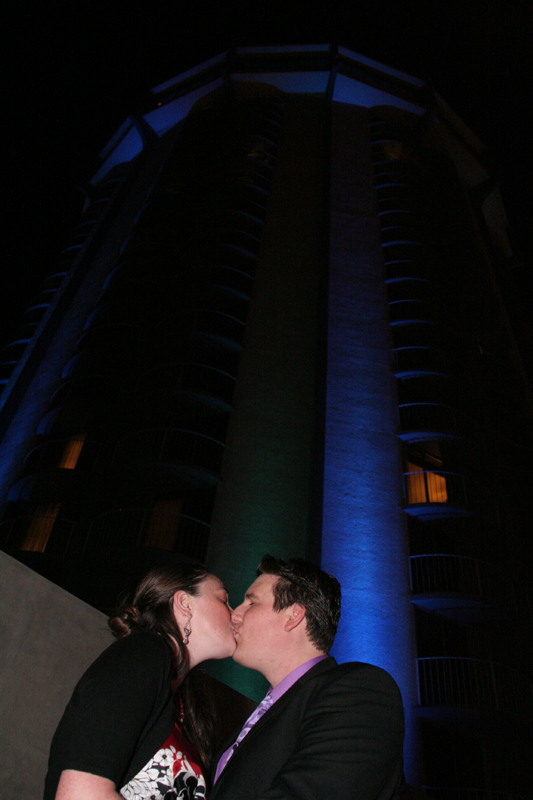 The rest of the night was dinner with Laura and James.  The hotel managers were so accommodating, they provided a free bottle of champagne for the table and chocolate covered strawberries back in the room.  They also comp’ed a dessert sampler and molten chocolate cake.  I had a great time at dinner where Laura and Jenn shared their day’s fun and adventures and James and I shared our trials and tribulations.  The dinner went very well, Laura and James had the best meals of the night.  I want to go back to WEST to try what they had, some chicken and pasta or something.  Dinner lasted from 8pm to around 11pm.  Our waiter, Mike, was awesome bringing out all the champagne on time and the meals were excellent.  The manager Michael was very attentive and congratulatory all night long.  I was very impressed.  If you know me you know I ask for special treatment sometimes, but this time I didn’t and got the world!  I love Hotel Angeleno and WEST!

After dinner, Jenn and I went to our room we had for the night and stayed up until 2am talking.  I showed her the website on my phone and she laughed and cried and hugged me a lot.

We woke up rather early about 7am this morning and went to breakfast at 8am at WEST again. After breakfast I wanted to roam the lounge area and Jenn and I ended up slow dancing to the songs playing over the speakers.  I was a nice ending to a fantastic evening and night.  I feel we might want to go back each year on June 19th to celebrate. The Hotel Angeleno wasn’t too expensive for bring a chic boutique hotel. I can’t recommend it any higher.

We then decided to go The J. Paul Getty Center this afternoon for a walk in the gardens and around the buildings. I think I got some sun 🙂 It was a nice relaxing morning/afternoon with gentle breezes, blue skies and green gardens.  I really enjoyed the walk around the Getty Center.  I suggest that if you have a beautiful day where you don’t know what to do, grab $15 and head on up to the Getty Center in Los Angeles.