The Bachelor party was awesome! 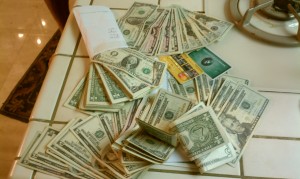 The bachelor party was awesome this last weekend.  It started about 7pm at Joseph’s house.  We ordered 2 cabs, one came much later, and headed out to Huntington Beach Beer Company for dinner.  The food was great and the waitress was so nice to all 8 of us there.  We had food and about 4 pitchers of beer, which all had a little ice pack in them to help keep it cold.  How cool!  We soon left HB Brew co and went to Sharkies.  Somehow along the way Joseph got separated from us.

At Sharkies, I go up to the bar to order a beer, just one beer for me.  I wasn’t thinking about everyone else and how a pitcher of beer would be so much better.  Me, the man of honor, showing off his true idiot colors.  After a good amount of time there listening to the blasting music and talking to the girls at the tables around us, we bounced the bar.

Nextdoor was Longboard’s, all of us entered except Joseph, who was no where to be found, and Chris, who had an expired drivers licence.  Seriously?  An expired drivers licence to a bachelor party?  *shakes head* Embarassing. At Longboard John bought a shot called Starry Night (Goldschlager & Jagermeister), it kicked my ass and everyone else who took it.  I had told everyone I wanted beer only since I could last longer on it and have more fun.  But damn John buying shots, he did it as well at a birthday party of mine with an alien secretion.

It is now 11pm and we need to get a cab back to Joseph’s.  Easy enough on Main Street in HB.  30 Minutes after we get home, the entertainment arrives and that is all I can tell you.  I went to bed about 3am, crashed out on the sofa.  Jon & John also stayed the night.  The cleaning service came in at 10am the next morning by which time I was out of the house.  It was an awesome bachelor party, one I wish we could do every year. BTW that photos has about $500 in it mostly $1.