Seattle could have been a great place to propose 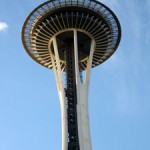 This last weekend Jenn and I went to Seattle. We took the Coast Starlight Amtrak train from Los Angeles Union Station to Seattle.  It took 36 hours to get to Seattle and was a great ride.  While in Seattle I made reservations at SkyCity which is at the top level of the Seattle Space Needle.  It has a rotating restaurant which makes a full rotation in 47 minutes.  On the window side of the restaurant there is small ledge where people left drink coasters with messages.  Things like “Florida state represent: Sign your name” and “Sign the card for Steve’s 16th birthday.”  Jenn then says “This would be a great way to propose, leave the message on the ledge to have it come around for her to read.”  Internally I turn into Homer Simpson, “D’OH!” That WOULD have been a great idea, however it never occurred to me.   I wish I would have thought of it and could have done it there.  It was a nice romantic night and would have been great to do it in this location.  But noooooo! My plan is similar but different.  I hope it all works out. If not, another trip to Seattle is my #2 plan then.