So as I’m sure you know I got bonus gifts in addition to the beautiful ring – as if that was not enough?  A nice picture frame that I have now put a shocked jenn picture into, lego people and plant, a manual that I *might* need and a gigantic paper weight type post it holder – avec post-its! 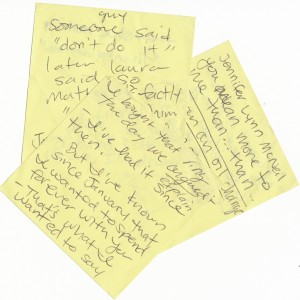 My post it notes =) Go ahead and think I’m crazy.

Post its were exciting because paired with Laura’s pen I could write down those precious quotes from the best night of my life thus far.  Before Jeff could say anything to me, some guy shouted “don’t do it!”  Later, Laura said, oh so matter of fact: “I flipped him off” James replied with “you turned around and did it?” — “yeah, I’m drunk!” She says, then motions and shows us – “thank’s asshole.”  – CLASSIC

In sweeter moments, Jeff told me he bought the ring in October of 2008 and knew since then he wanted to marry me.  He went on to say that he knew since January of this year that it was really going to work and was ready to spend forever with me.  “That’s what I wanted to say,” he told me.

And today he told me to slow down and enjoy the first day of the rest of our lives together. *Happy tear*

Certain individual’s responses to my call have also been hilarious to me.  My brother calling me a ho then being surprised was fun.  Evan being confused by my seemingly random request to be put on speakerphone to hear my sister, who’s initial thought was that a political caller was responsible for making their phone ring while company was over and that it definitely wasn’t for her, was funny to me.  Amber saying “congratulations!” as soon as she picked up and me responding with something like “darn you already know,” amused Jeff.  But the best by far was Jan Carlson:

Jan: Hello?
Jenn: Hi Mrs. Carlson this is Jennifer McNeil
Jan: Well hello Miss Jennifer. So, do we have a baby?
Jenn (confused at first and then getting it): oh, no! That is actually not while I’m calling . . .
. . .
Jan: That’s not good news, that’s Wunderbar!

One of my aunts also asked if Sarah gave birth, and my preschool teacher was WAY excited it seemed.

Then there was my groggy mother who called after talking to me a few times already and screamed of joy into the phone.  “Who is this?” I asked, “Is this my mother?”

This has clearly all been rather amusing to me.  Jeff, did you just sense I needed some entertainment?