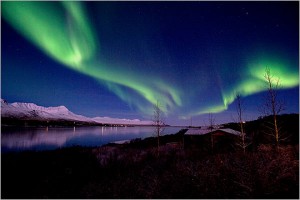 We are going to the I-lands, Ireland and Iceland!  We just booked our flight to Reykjavik this afternoon and are extremely excited about it.  I am sure you are wondering why we want to go to a frozen land during the coldest month of the year?  Two words… aurora borealis.  In the longer days of winter, in the higher latitudes you get the best conditions for the auroras.  Jenn and I are going to pack our warm clothes, grab our camera gear and hop a plane to Iceland.  When we land there will be only 4 hours of “daylight” when the sun is in the sky, the remainder of the time will be twilight or night as the earth spins away from the sun.

From Wikipedia, the universal source for all known knowledge: 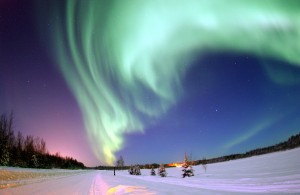 An aurora (plural: aurorae or auroras) is a natural light display in the sky particularly in the high latitude (Arctic and Antarctic) regions, caused by the collision of energetic charged particles with atoms in the high altitude atmosphere (thermosphere). The charged particles originate in the magnetosphere and solar wind and, on Earth, are directed by the Earth’s magnetic field into the atmosphere. Aurora is classified as diffuse or discrete aurora. Most aurorae occur in a band known as the auroral zone,which is typically 3° to 6° in latitudinal extent and at all local times or longitudes. The auroral zone is typically 10° to 20° from the magnetic pole defined by the axis of the Earth’s magnetic dipole. During a geomagnetic storm, the auroral zone will expand to lower latitudes. The diffuse aurora is a featureless glow in the sky which may not be visible to the naked eye even on a dark night and defines the extent of the auroral zone. The discrete aurora are sharply defined features within the diffuse aurora which vary in brightness from just barely visible to the naked eye to bright enough to read a newspaper at night. Discrete aurorae are usually observed only in the night sky because they are as bright as the sunlit sky. Aurorae occasionally occur poleward of the auroral zone as diffuse patches or arcs (polar cap arcs), which are generally invisible to the naked eye.

In northern latitudes, the effect is known as the aurora borealis (or the northern lights), named after the Roman goddess of dawn, Aurora, and the Greek name for the north wind, Boreas, by Pierre Gassendi in 1621. Auroras seen near the magnetic pole may be high overhead, but from farther away, they illuminate the northern horizon as a greenish glow or sometimes a faint red, as if the Sun were rising from an unusual direction. Discrete aurorae often display magnetic field lines or curtain-like structures, and can change within seconds or glow unchanging for hours, most often in fluorescent green.