Yes, we are color freaks… and yes, Jeff, I love yellow… but this does not mean I think you should pose with the bees! =P

Had our engagement shoot with Scott (aka Nikon guy, aka Mr. Land) and it was filled with way more excitement than I thought it would be.  I was a pile of nerves in the beginning and couldn’t stop giggling – go figure – but quickly wiped that goofy smile off my face when Jeff was attacked by not one, but a swarm of wasps leaving several stings.  One on the lip, one on the forehead and two on the neck. 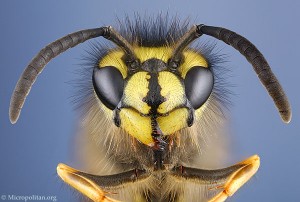 Is this not the scariest thing ever?! And that’s just one of them, try looking at 20.

Luckily, he protected me as a so slowly kneeled down and as Scott says, took a nap while Jeff came to my rescue, enveloping my body and taking on the devil bug!  Ok, he actually got so freaked out he slipped and fell on his butt and sort of shimmied down the stairs while I crouched in shock not wanting to leave my man (though I may have been in his way).  The whole time all I can hear is Scott shouting “Jennifer get out of there! Quick!”  So come to find out Jeff had 5 more stings on his back, and one on his arm.  Yes math folks, that’s a total of 10!

I almost lost it.  I was mortified that I couldn’t do anything to help him.  But I think thanks to my Zen day with Kelli, I kept it together.

And all of that was the first 10 minutes!!!  Jeff was such a good sport – I almost can’t believe how much he powered through smiling after that.  I was the one grimacing because I just couldn’t believe it.  But he powered through and he didn’t get too puffy – thank goodness he is not allergic!

We then got to play around on some other stairs, and walk on the railroad tracks super illegally.  I think that was my most favorite part.  I LOVE railroad tracks!

After our casualness in Old Town Irvine, we got all fancified for a new location.  We spent an hour or more near a lake in a business area in Costa Mesa getting to climb things, hug, kiss and be us.

Dinner was at Salt Creek Grille and was so fabulous!  I can’t wait to eat there in October!  Jumbo stuffed shrimp sadly are NOT one of our passed appetizers, but I’m going to try to change that, because they are wonderful!

So after dinner, and Souffle, Scott took us back to Irvine and yelled at me for questioning his ability to navigate.  (I think it was a mostly playful yell.)  He then proceed to try to run a red light (to show me who is boss?) and I wasn’t going to even say anything but then both Jeff and I blurted out “red light!” And the three of us had a good time laughing about it.  He makes me laugh a lot, which is great because I like to laugh and I don’t think I’m so nervous about photos anymore!

I’ll post some as soon as we get them.  Can’t wait!