EARLY rise this morning.  Got in line for the tender to shore at 6:30 and we were on shore in the rain by 7:10.  After a thorough soak, we got in the Misty Bay Lodge van and took a 10 minute ride to the house to check in for our whale watching expedition with Captain Dan!  It’s a cute little place, the Misty Bay Lodge, I would definitely stay there if we were to trek back up to Alaska via other means of transportation .  Hope, Dan’s wife, checked us in and was a total sweetie.  We boarded our little boat built for no more than 7 (only 5 of us sailed) and held on for dear life through the rough seas before stopping near the coast and happening upon a sleeping humpback.  They just float!  Kinda odd.  I was enamored by that when Dan decided to take us for a ride.  “Why are we leaving the whale” I thought – but I guess he had more excitement than sleeping ones in mind.  After an hour we arrived at Adolphus Point, a well-known spot for whales to kick back.   There were other boats out there too – most were polite but some sped around and scared the whales away, which was too bad.  One speedy boat sort of helped us out though.  Dan shut off the engine when we got where he wanted, and we could see blow spouts in the distance.  The whales then made a turn away from some other boats and right toward us!  Bobbing along with the current we got right in their path, but the engines being off kept them from getting spooked so they literally came within 5 feet of the boat!  Jeff was like a kid in a candy shop – and I hope we can hear his voice on film “Oh my gosh oh my gosh,  look at that!  OH – MY – GOSH”  Definitely better than a singular sleeping humpback was this pod of 7 or 8.  One looked up at us, communicated to his peeps, and they dove under us and appeared again minutes later in the distance.  Definitely well worth the money and time spent.

Back at the lodge, Elise and Jeff stayed for fish and chips while Bruce and I went back to the ship.  I went back out in hopes of finding my party but just missed them and hung out by myself in the rain.  It was still nice out though.  I like Alaska weather.

Played some trivia tonight and went back to our room to find a surprise of Champagne and strawberries.  Long long day, very worn out.

Here are the photos: 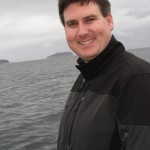 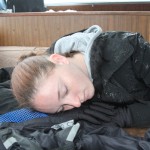 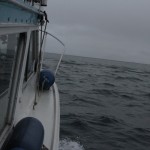 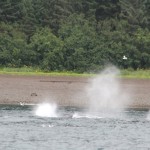 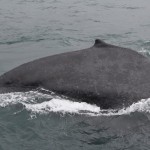 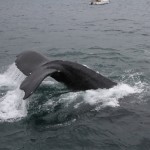 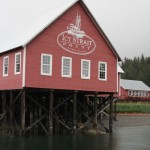 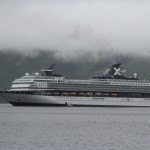 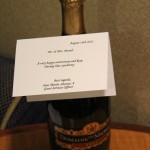